From the Factory To Your Home

More commercial and industrial facilities are turning to combined heat and power (CHP) for the energy and carbon emissions savings. Heat recovery steam generators recover heat that is wasted in traditional power generation. The steam produced is then used for heating, cooling, and industrial processes.

By providing power and heat independence, cogeneration is playing an increasingly important role in power reliability by keeping critical infrastructure running during catastrophic weather events. As weather patterns conspire to deliver some fierce storms this hurricane season, here's how CHP could provide your facility with independence from the grid.

If you're running a hospital, data center, or other critical infrastructure, storms and blackouts cannot incapacitate your operations. Power reliability is essential to deliver critical services. If you want to power through the storm, CHP systems have proven to be more reliable than backup generators with maintenance issues, limited fuel supply, and slow startup times. Crucially, many CHP systems use natural gas as a low-cost, reliable fuel source, with only backup recourse to the electric grid.

When the electric grid has failed during the most catastrophic hurricanes, including Katrina and Harvey, hospitals in the epicenter have been able to maintain power reliability. By getting electrical power and thermal energy from the same natural gas source, these medical facilities were able to generate the electrical power, heating, and cooling to deliver critical care uninterrupted.

The higher efficiency results in significant reductions in fuel use for a unit of energy output. Trigeneration delivers even better energy performance. In this system, heat recovery steam generators produce combined heat, power, and cooling.

You can further increase your independence from the grid by using renewable energy sources. Waste and wastewater facilities, for example, use biogas from waste as a fuel to produce electricity and steam to process waste and heat buildings. Other commercial and industrial facilities use wood and other forms of biomass.

The heat recovery steam generator has turned onsite power systems into mini power and heating systems. In the future, your CHP plant could become part of a micro grid that provides power reliability during blackouts. 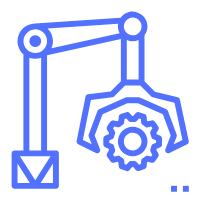 In the United States alone, there are millions of people who work in manufacturing. Some plants are big, and others are small. Some plants make sanders, and others make microwaves. it's a really diverse industry, which is good news for anyone who works in manufacturing. You can always venture out and try something new! Another key thing to remember about manufacturing is that as technology changes, new items must be made to keep pace with that technology. This industry is definitely here to stay, which is why you should learn more about it! Start with the articles here, which are informative and understandable.